Archive for the ‘Living in the Hamptons’ Category

11.01.2015, Comments Off on Hampton Farm to Table Thanksgiving Dinner, Living in the Hamptons, by Timothy.

Start a new family tradition the entire family can enjoy.  Plan a Farm to Table Thanksgiving with fresh ingredients from … END_OF_DOCUMENT_TOKEN_TO_BE_REPLACED

The Baker House was originally constructed in 1648 by sea captain, Daniel Howe. Not too long afterwards, Howe sold the building to Thomas Baker, one of East Hampton’s founders. Baker turned the building into a Tavern. It also served as town meeting hal… END_OF_DOCUMENT_TOKEN_TO_BE_REPLACED

10.17.2015, Comments Off on Cedar Island Lighthouse, Living in the Hamptons, by Gail Gallagher. 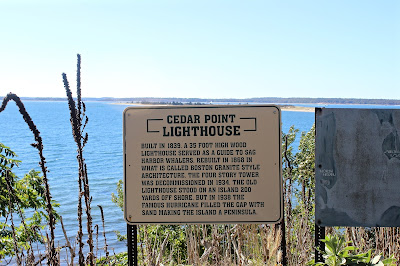 Since seeing Hubbard Latham Fordham’s still life of shell fish with view of Sag Harbor painted at Cedar Island Lighthouse, I’ve been wanting to visit said lighthouse. The lighthouse is not easily seen unless you are aboard ship cruising into Sag Harbor port from Gardiner’s Bay. 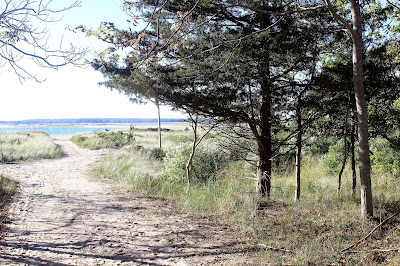 Cedar Island Lighthouse was built in 1839 to guide whaling and merchant ships into the busy international port of Sag Harbor. The original wooden lighthouse was replaced by the current granite structure in 1868. The great hurricane of 1938 brought in the walkable strip of sand that now connects Cedar Point Park to the lighthouse. 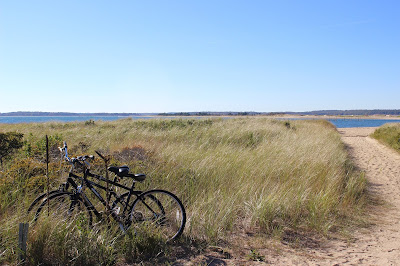 I got out my trusty local maps and set a course for Cedar Point County Park. We took the Sag Harbor Turnpike (route 114) to Swamp Road. Swamp road weaves its way through a thin, low lying, shrub oak forest. Vehicular traffic was light and it appears to be a popular peloton pathway. It was so deserted that Hugh commented, “I hope we don’t get a flat in here.” After Swamp Road we followed the Cedar Point signs along Old Northwest Road to the park. 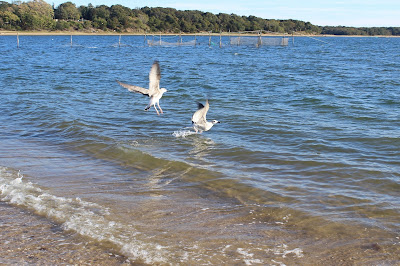 The park is a nature lovers paradise. A beautiful spot for bird watching, hiking, camping and water sports. 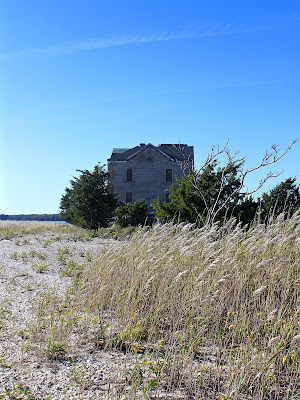 The lighthouse is in solitary splendor at the end of Cedar Point. 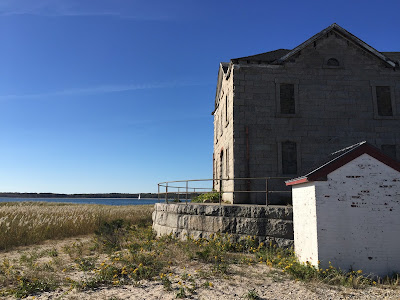 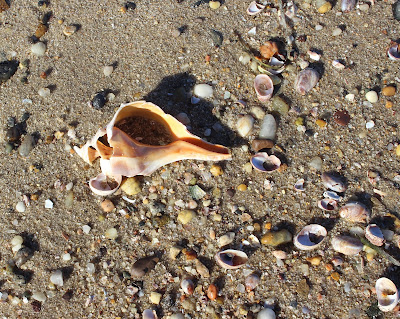 The beach is littered with still life subjects. 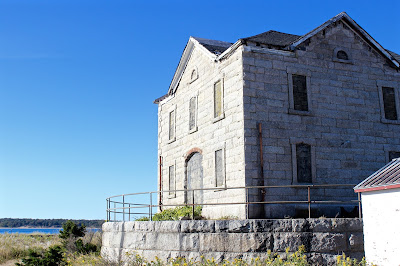 I was thinking of Fordham with his still life subject set up on a table near the window. Based on how brightly the sun shone upon the Sag Harbor facing windows the afternoon of our visit, I think he must have painted with the morning sun. Fordham did two stints as lighthouse keeper. The first was 1849-1853 immediately following Moses Bears, the father of Fordham’s painting colleague, Orlando Hand Bears. This would have been in the old wooden lighthouse. The second stint was 1862-1869. The current granite lighthouse was built during 1868. Fordham would have been keeper during its construction period. 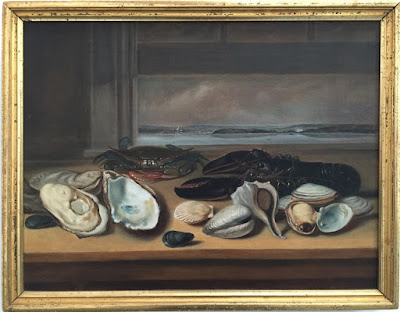 Portrait of Shellfish:
A View from Cedar Island Lighthouse Looking Toward Sag Harbor 1866
Hubbard Latham Fordham (1794-1872)
oil on canvas
loan from Joy Lewis to the Parrish Art Museum
The drawing below by William Tooker dated in 1869 depicts the new lighthouse on the left surrounded by scaffolding with the old wooden lighthouse on the right. 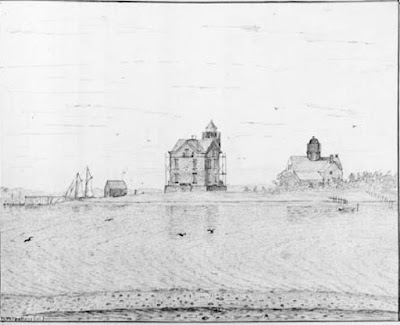 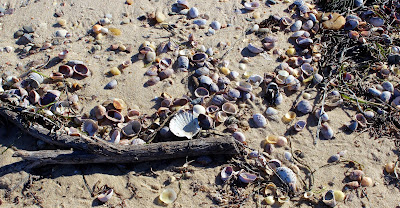 Fordham was struck by lightning one summer morning while out sailing during his first stint as keeper. In 1851 he would have been 57. 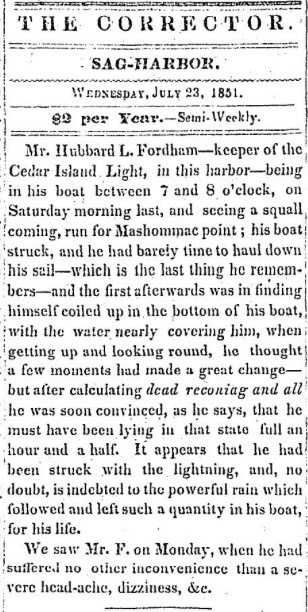 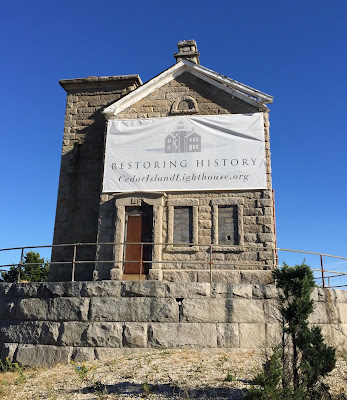 A campaign to restore the lighthouse is currently under way. 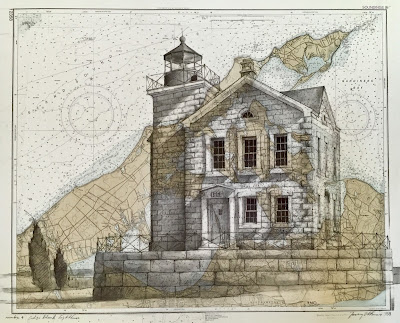 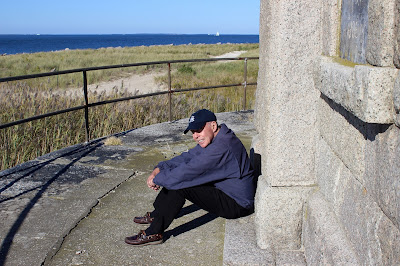 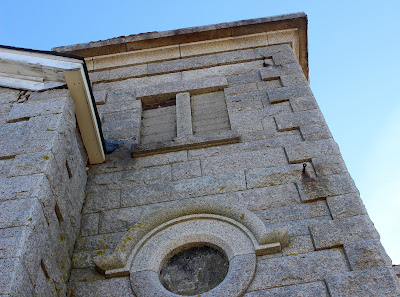 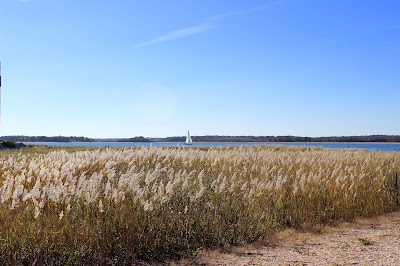 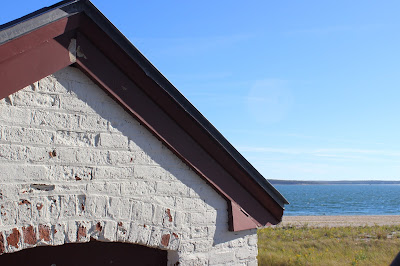 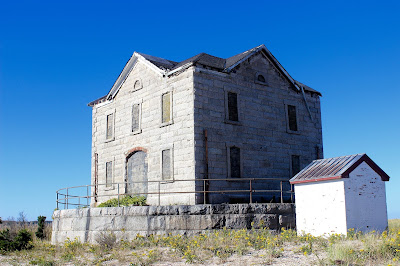 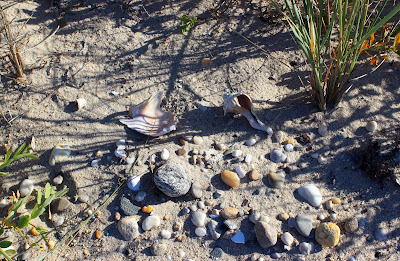 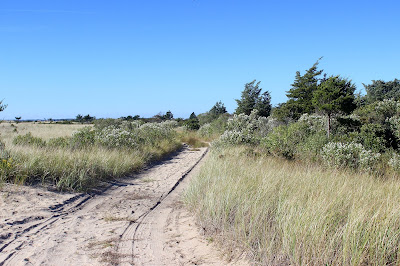 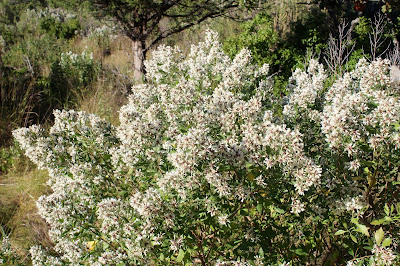 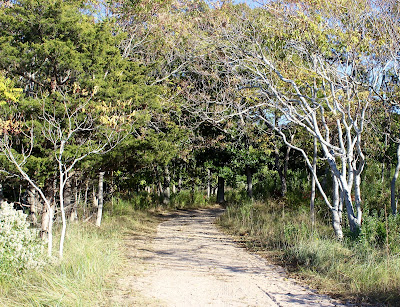 Noted filmmaker, Richard Altomonte, has produced a historical prospective of the lighthouse. 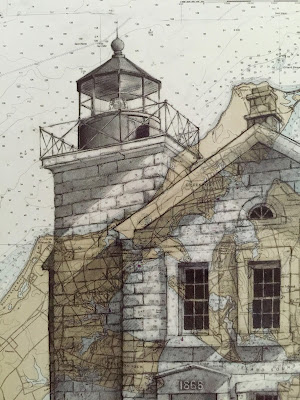 The lantern has recently been restored and is standing in front of the Sag Harbor Whaling and Historical Museum. 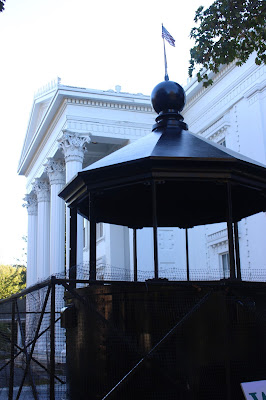 I could have easily spent the day in Cedar Point Park. 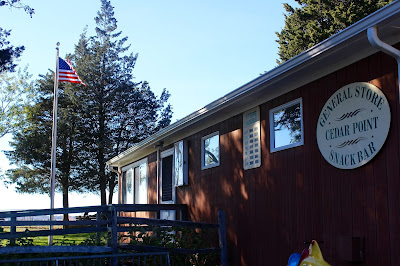 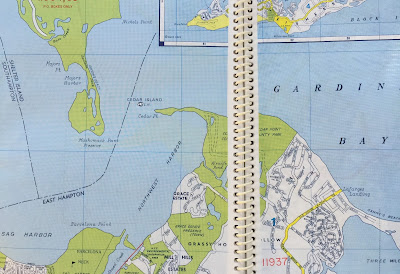 My map doesn’t count the sand from the 1938 hurricane as ‘land’.
You never know when weather will intervene again. 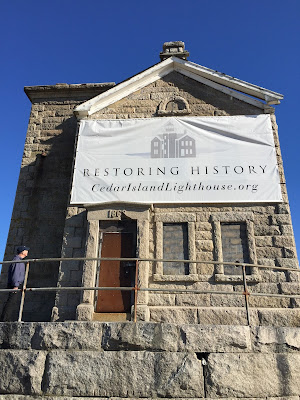 I hope that we are able to restore this building to its former glory.
Imagine, it may become a bed and breakfast.

END_OF_DOCUMENT_TOKEN_TO_BE_REPLACED

Hurricane Joaquin has blown out to sea, but has been supplanted by a pounding Nor’easter. Heavy mist-filled wind and cool temperatures keep me indoors. Perfect weather for curling up with a good book. I recently read The Sea Captain’s Wife by Beth… END_OF_DOCUMENT_TOKEN_TO_BE_REPLACED

One of the most exciting things about my recent visit to Joy Lewis’s historic Sag Harbor home was seeing a trio of paintings by local artist Orlando Hand Bears. Bears (pronounced and sometimes spelled BEERS) was a resident of Sag Harbor who died on Feb… END_OF_DOCUMENT_TOKEN_TO_BE_REPLACED

A Heart for History

Joy Lewis and her husband loved old things before folk art was thought precious. Haunting estate sales and antique shops, they found beautiful heirlooms imbued with the spirits of their former owners. They saved beloved objects from destruction a… END_OF_DOCUMENT_TOKEN_TO_BE_REPLACED

Amazing clouds before the rain. END_OF_DOCUMENT_TOKEN_TO_BE_REPLACED

As a birthday surprise, I made a preliminary raison d’être for Hugh.  He is often showing photos of paintings to friends on his cell phone. I thought that he should have something more substantial. Monique at the beautiful blog La Table de Nana mentioned using Artisan State to make a book for her grandson. Artisan State (neither one of us has been paid to reccommend them) looked like it would be easy to use. I went to the studio when Hugh was out, took photos of his paintings with my iPhone, dropped them into the Artisan State template (I used Little Black Book 5″ x 7″) and ordered. The finished product arrived soon thereafter and I love how it turned out. 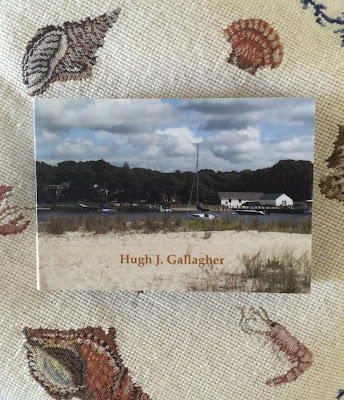 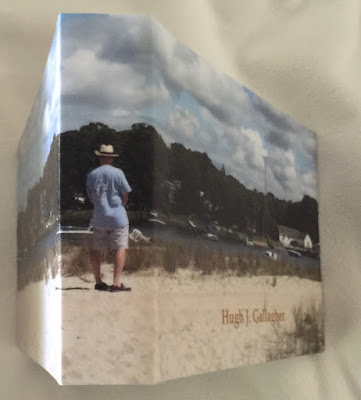 See below for the embed version of the book (you will need adobe flash) or via link. Many of the paintings that I photographed are not considered DONE by him yet, I think they are all beautiful examples of the wonderful work he has been doing. I am so proud of him.

END_OF_DOCUMENT_TOKEN_TO_BE_REPLACED

09.06.2015, Comments Off on Beach Plum Harvest, Living in the Hamptons, by Gail Gallagher.

I returned to Long Beach to harvest beach plums.I had marked their place in spring.Spring beach plum blooms.There was plenty of low hanging fruit.I picked a gallon zip lock bag full,Shakespeare Bowl by Roxann SorensonHarp on it still shall I till heart… END_OF_DOCUMENT_TOKEN_TO_BE_REPLACED

09.04.2015, Comments Off on Ephraim Niles Byram – Astronomer of Sag Harbor, Living in the Hamptons, by Gail Gallagher.

I’ve been intrigued by Ephraim Niles Byram since discovering a character based on him in a ghost story.  The Astronomer’s House by Val Schaffner reimagines the life of a mysterious astronomer in a tower house near a cemetery. I am gratef… END_OF_DOCUMENT_TOKEN_TO_BE_REPLACED