The curious lives of Cappy Amundsen

02.17.2013, Living in the Hamptons, by Gail Gallagher.
Not so long ago you may have seen a scruffy looking denizen of a Sag Harbor watering hole and wondered what his story was. If you turned to the regular on the bar stool next to you and asked about him, your fellow patron may have said, “oh, I think he paints seascapes” or “just some old sailor” or possibly something less flattering.  In reality though, you would have been looking at an artist who had lived a legendary life among New York City’s 20th century painting giants. An excellent book written by Terry Wallace describes his amazing life. C. Hjalmar Amundsen was born Casper Hjalmar Emerson, III in New York City in 1911.  He was known as “Cappy” and passed away in relative obscurity in 2001.

Cappy was one of the founders of the Washington Square Outdoor Art Show with Jackson Pollock and Willem de Kooning among others. He also followed in the tradition of many East End painters by teaching summer painting classes en plein air. 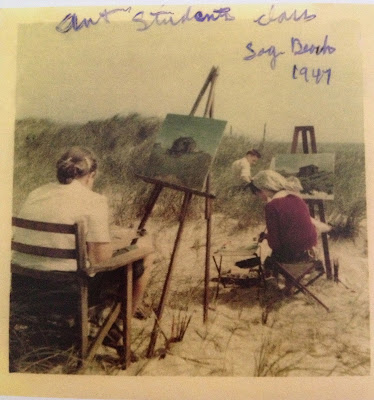 Cappy worked as a commercial fisherman, did cover illustrations for Motor Boating magazine, and became actively involved in Sag Harbor Village activities. He produced a myriad of artistic work portraying harbor life on the East Coast. Unfortunately, Cappy confuses those of us who wish to collect his work by painting under numerous pseudonyms. Sadly, when Cappy passed away, those who loved the paintings of J.J. Enwright or A. Emerson may not have known to mourn.

In the book, “Cappy, The Life and Art of C. Hjalmar Amundsen” Terry Wallace speculates on what may have caused Amundsen to paint under various aliases (at least a dozen). Was it was because Cappy’s father was involved in a much publicized marriage scandal? Perhaps it was because he was so prolific he could find markets for each painting identity that he created. We will probably never know.

Terry Wallace’s book on Cappy is an interesting read for both art enthusiast and history buff. Reading it reminded me of that old adage not to judge a book by it’s cover and that you may still be able to find a masterpiece at a yard sale. “Cappy” is available at Wallace Gallery and at the Sag Harbor Whaling Museum.

“Village Character an Art World Legend” by Rick Murphy here
“Cappy, The Life and Art of C. Hjalmar Amundsen” here
“On the Waterfront” by Annette Hinkle here
“An Artist of Many Names and Talents” by Richard Barons here

I liberally cribbed and summarized from Terry Wallace’s great book.
Get it now before it is out of print.
CAPPY The Life and Art of C. Hjalmar Amundsen
Terry Wallace
631-329-4516
email: wallacearts@earthlink.net
Published 2011 by M.T. Fine Arts, Inc. in association with the Sag Harbor Whaling Museum
$35